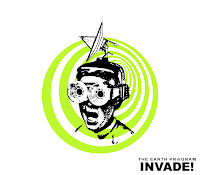 After only a few minutes into the album, I feel as though I am floating.
The Earth Program's debut album "INVADE!" resonates the way my favorite bands did back in the 90's. Music back then made me dance not only because it sounded good, but because it understood me better than anyone else. This is a rare and special find.
Describing themselves as a "cross-genre, multimedia band", The Earth Program reminds me of Sonic Youth, Sick Bees, Polaris, and The Pixies. These are heavy comparisons to make; I say with sincerity that this band has earned them. In a nutshell, I would describe them as bittersweet alternative rock with well-timed effects.
Listening to this album really throws me off. I can't help but reminisce about my teenage years when I should be concentrating on more important aspects, such as melody, cadence, and influence. Nevermind, I'm sixteen again! I've met the love of my life! No one in the history of the world has ever felt the intense love I feel right now!
Ahem. My favorite song is "Greeny", which demonstrates the best of everyone's abilities.
"The Mind & The Matter" reminds me of The Beatles' tracks played backwards ("cranberry sauce"). "Stay Tuned" is the last track and also the heaviest of the album. I like this direction.
If you're looking for a listening experience that is both fun and skilled, with a high chance of reminiscence, look no further than "INVADE!".
Offered for free, click here to listen to: The Earth Program - INVADE!
Posted by Jacquie at 8:59 PM